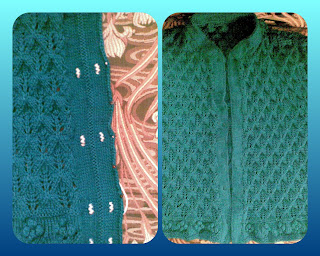 Now we come to the finishing stage. there were some problems for me; How I will finish it collar, or just picking up, and simple button band. I have decided to finish it in a simple way which is simple button band, and button hole around the whole sweater. Oh here is the other problem came, How many stitches I will pick up?!! so I had to know more about the ratio of picking up around straight lines, and curved lines; I have learned some ideas about that, and of course I had to chose the needle size too. I have done half of the band twice using different ratio with different sizes of needles so I had to wrap the band twice.
Finally after I know the suitable ratio for picking up which works for me, and the better size of needle, I have decided to finish it in a simple way, but learn something new which is (Double band, and magic buttonholes). Here is the pictures of the double button bands before finishing and after finishing it. Thanks  God finally learn something new from long journey. 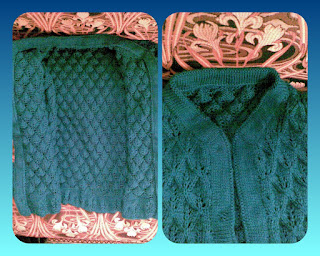 Here the double bands inside and outside before i sew the buttons.
Posted by Lily at 11:15 PM