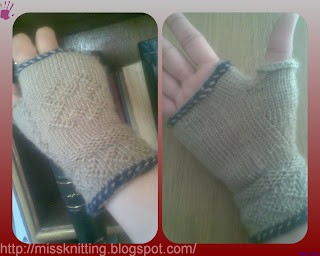 Here is the mitten.
this pattern is free here is the site in case anyone wants to give it a try.
The pattern
Posted by Lily at 4:16 AM 3 comments: 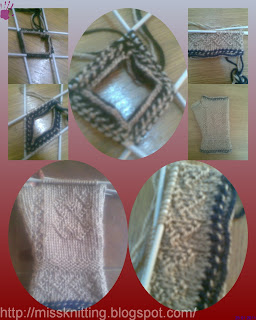 The lovely problems with the mitten

I have countered another problem -holding the yarns. I have found the previous video , and it is really helpful, and useful, but I should to untwist the yarns after each round. It is not like holding two yarns or more in fair-Isle or colorful work because in Fair-Isle we can use the two methods of holding yarn to avoid mixing them; we cannot do this here. we must twist yarns to execute the twined stitches.
Posted by Lily at 4:20 AM 2 comments:

I have tried to make a fingerless glove for my brother-that one with small fingers-I wanted to make my own pattern using my own needle size and what I have from yarns. Of course I didn't find pattern suit my needing, So I have decided to start make my own.

I wanted to know according what I can divide for the fingers, and different method to make the thumb. Of course I have some books about how to make your own pattern, but I am not still comfortable with anyone. So what I am doing is I am trying to make a basic pattern and figure out the rules from this pattern.

To be more precises it is my dream to make my own pattern using the stitches I like, and Using any yarn I want to use, or any needle size.
My friend Barb called that intention and passion a potential designing.-I don't call it like this. I always tell her that I just like to play with things I learn, and make things according my taste, and style. In addition , I like to understand what is behind any thing I learn.

I have searched for something in Youtube site, and found these lovely series of lessons from lady Kelley trying to explain how to make a mitten. what I really like about her lessons is she have not a pattern; she makes her own and put her hand on the mitten to tell us how she define the stitches for thumb, the distance which she should to knit until decreasing stage ....etc. During this she explains the two method for thumb. Thanks for her so so much. Hope to see or read something like this for the gloves.

My toes sock with embroidery touch 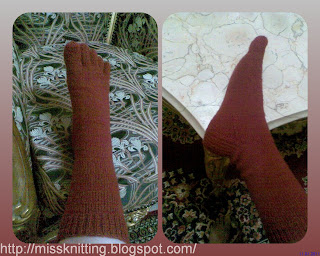 I have finished one of its pair, and I am going to finish the other one. LOL
Posted by Lily at 10:04 AM 4 comments: 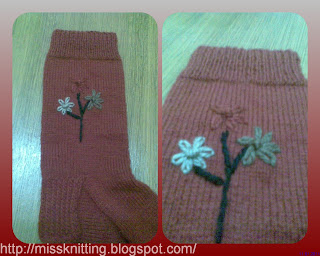 As usual when I make plain sock; I prefer to put my embroidery touch. That is what I did with my toes sock. I have use four different embroidery stitches to finish my sock.
Posted by Lily at 10:00 AM No comments:

workshop of my sock 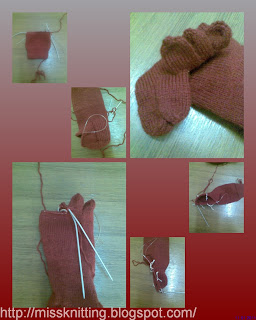 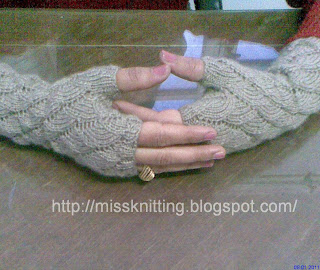 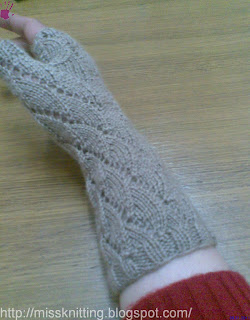 I have made this fingerless gloves using double pointed needle size 2.5mm, and 2mm. Its stitch is 10 rounds. I love this fan shape so much. It is really so easy stitch, and inspiring too. I think I didn't finish with this stitch. I have many ideas to use this stitch again.
OH I am doing small projects ; my aim is to keep in touch with knitting despite my studying , and work.
Posted by Lily at 10:19 AM 5 comments:

My fingerless gloves with details 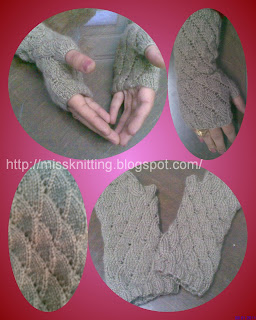 Cable hat for my great Fan 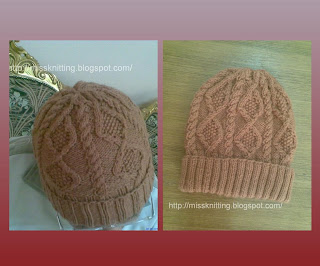 I have made this hat for my great fan-LOL it is my brother -Ahmed. He loves my knitted work, he also was the first one who wore my initial work. They were very small things. Hats with simple stitch and no shape, scarves with very simple stitch and bad finishing. He wore them with love and appreciation too. He also wore them , and feel they are worth. That is why I want to make him really worth pieces. I think I will.
Posted by Lily at 10:08 AM 4 comments:

Workshop for the hat ( and little story) 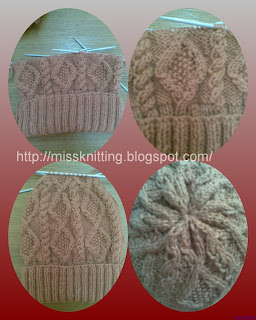 This hat is a Japanese charted pattern. I have made it use double pointed needles size 3.5mm, and 3mm. I have adjusted the pattern to fit my yarn, and the size needle I have used. I have a long story with knitting. My mom has taught me how to knit when I was little child; she has taught me how to knit, purl, and how to pick up the dropped stitch. I didn't know how to make anything from knitting , I also didn't know how to shape any piece until four years later-this was my first stage with knitting. The second stage was four to five years later when I have learned English.

First, I saw many many sites have explained knitting in English . I loved this and wanted to learn how to knit again, but it was really so difficult. I have countered some difficulties -one of them was I knew each word in the written pattern , but I didn't understand the meaning-LOL oh it made me feel crazy. Yes I didn't understand the written pattern because I didn't know that there is another step I should to know; it was the structure, and arrangement of the English sentence. This obstacle was my first step to try with the charted pattern in knitting and crochet. So I have started with the abbreviations, and the symbols which matche with them. I have started with crochet, then with knitting.

After I improved my English-a bit- I understood the written pattern too, and made many of them. Now I prefer a charted pattern more, and consider it an amazing tool for anyone who really wants to knit or crochet; it also saves times, and make us avoid many mistakes. In addition it eliminates the obstacles of any other language. Anyone can knit whatever pattern he/she wants.

There is something else about charted pattern, and its symbols specially knitting symbols. I have tried to figure out the meaning beyond the symbols - why specific symbol means to slip two and put them in front then purl two and then knit two on the cable? what was in the mind of the person who made this symbols to indicate a specific meaning? Why I am trying to find out sense beyond the symbols ? To remember it. I have a problem to keep something in mind if I don't understand what beyond it. There are some symbols really easy to know why they indicate specific meaning, but there are some really difficult -for me- to know what beyond them. I will try to know.
Posted by Lily at 9:28 AM 2 comments: